One Small Change to Help With Anxiety & Panic 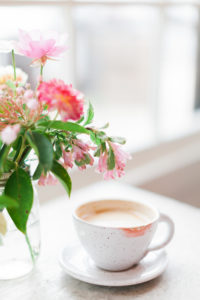 If you struggle with generalized anxiety or panic attacks, you might want to limit your coffee intake to one cup per day.

Although there are numerous studies confirming caffeine’s role in anxiety and panic, it is one factor that is often overlooked.

Consuming more than 400 mg of caffeine at one time can lead to feelings of over stimulation and can cause anxiety or make it worse.

Panic attacks are often triggered by physical sensations such as a rapid heart rate or butterflies in the stomach, which can be caused by consuming moderate to high amounts of caffeine. Some people who are very sensitive may need to avoid caffeine altogether to avoid these triggers.

Most people with anxiety and/or panic should limit the amount of daily caffeine they consume to 0 to 200 milligrams. An average 8 oz cup of home-brewed coffee has about 100 mg, compared with 250 mg in a tall Starbucks coffee. Energy drinks can have as much as 400 mg per serving. Soft drinks can contain a significant amount as well: Mountain Dew has 55 mg while a can of Coca-Cola has 35 mg.

Your email address will not be published. Required fields are marked*